I debated whether I should post a book review on author, Stephen King’s latest book, The Outsider, published by Simon & Schuster, Inc., New York, New York. This celebrated author is the master of his craft. Yet, my book review followers said, “Yes! Review it!” when I asked them on my personal Facebook page. 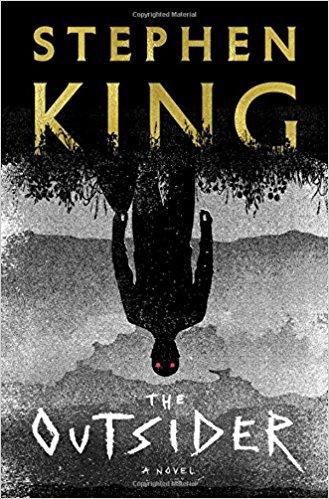 While he and I are not quite from the same generation, I have read every book by Mr. King including books under his pseudonym, Richard Bachman, his collaborations with other authors and his book, On Writing published in 2000. I have been a die-hard fan since I began reading his books in the late 1970’s, however, I must confess even as a die-hard fan of Mr. King I have not always given him a 5-Hoot rating. For example, The Dark Tower Series, beloved by others, but not so much by me. And I thought it took him a couple of books after recovering from his car accident to get his writing mojo back – the online serialized horror novel, The Plant and his digital novella, Riding the Bullet. They were good novels, but not what this reader came to expect from one of my all-time favorite authors. Gratefully, however, that Mr. King abandoned his ridiculous idea of quitting writing all together.

The genius of Stephen King

What amazes me about Stephen King is how he can grab the reader’s attention from the first sentence to the last sentence. The second thing that amazes me about him is how he can write over 500 pages (in small type, no less!) keeping the reader totally engaged right to the very last word. This reader always goes into an immediate depression when finishing a Stephen King novel.

His writing is so damn good!

So why review The Outsider? Read on…

As a parent, I was a little leery of reading a crime, horror story about the murder and violation of children. The Outsider is a riveting ‘whodunit’ tale of two opposing stories of a despicable murder of 11-year old, Frankie Peterson.

With all the botched child murders and trumped up charges against innocent men and women in today’s world, the reader is caught between empathizing with the outraged murdered son’s family, The Petersons, Detective Ralph Anderson, who believes without a doubt who the killer is, and the alleged killer himself, Terry Maitland who believes there is a case of mistaken identity…. But DNA doesn’t lie, does it?

Then enters private investigator, Holly Gibney. Stephen King’s writing genius is on full display with introducing Holly to the reader. Even though reader can thoroughly understand Ralph’s initial opinion of Holly and what she is asking them all to consider and believe as a possibile explanation of the inexplicable, this reader found herself rooting for this meek, anxious, praying character, Holly Gibney.

Stephen King fans, and I believe even readers who may not be rabid horror, supernatural fiction fans will enjoy his latest book, The Outsider. While there is certainly tension and suspense, I found the level of such not as riveting as some of his past novels, although I would put The Outsider in the same class as his novel, The Green Mile… and worthy of a movie too.

Stephen King is a master at his craft. No doubt.

Give me a hoot here at Hoot@TheBloggingOwl.com. I would love it if you would follow this blog and at The Blogging Owl on Facebook, as well as, on Twitter@TheBloggingOwl.